The heart of Morocco beats strong and true in the arteries of its modern cities and ancient medinas, with a pulse that echoes proudly through its people. If you let it, Morocco’s spellbinding rhythm pulls you in and never lets go.

Then we discovered Morocco’s soul.

While staying in a rented riad in Fes, we befriended a local named Mohammed, who managed the property on behalf of its European owner. While we love the urban buzz, we wanted to find out what lay beyond the gates of the city. In true Moroccan style, Mohammed said he would be happy to help, suggesting we join him for a visit to his Berber relatives in a remote farming village.

A few days later, we found ourselves speeding westward with our friend on a mostly-uphill, two-hour journey to the farm. We weren’t entirely sure what we had gotten ourselves into, but the chance to make bread and couscous the “old-world” way and experience Moroccan rural life was just too enticing to pass up.

When we arrived, we were enthusiastically greeted by two scruffy dogs, a cat, several chickens, and a donkey. Mohammed’s aunt Zhoor and uncle Abdelkabir Elamrani were every bit as enthusiastic in their greeting, warmly embracing us like long-lost friends.

Rural Moroccan houses are hand-built using mud and straw, as they have been for centuries. Each room of this house is a separate structure, connected by well-worn paths and roughly arranged around a central courtyard. A pen in the yard keeps chickens, goats and a milk cow just a few steps from the kitchen door. Another dozen or so cows and a few donkeys were sheltered in a nearby barn.

Furnishings in the home were rugged and simple, but generously draped with richly-colored fabrics and carpets, softening the starkness of the adobe walls and floors. We were invited to sit on floor cushions around a low table in a large rectangular room. At night, the space was repurposed as a bedroom, but for now, it was a sunny dining room, where we enjoyed a light mid-day meal of yogurt, fruit and flatbreads.

Conversation proved challenging, with nephew Mohammed translating as best he could; when he was stumped, we used Google Translate. Our hosts were as curious about us as we were about the very different worlds we inhabited. We talked about families, our work, what we did for fun. Our stories about life back home were often met with puzzled nods, as it bore little resemblance to their daily existence. Electricity had only arrived in their tiny mountaintop village three years earlier.

After lunch, we set out on foot with Mohammed to see the village and meet more of his extended family. A rough, dusty road linked the simple adobe homes and outbuildings, collectively perched atop a gently sloped, sable-hued mountain ridge.

At the center of the village, our first stop was the beautiful mosque. From its vantage at the highest point on the mountain, the views in every direction were breathtaking. A tapestry of farms dotted by grazing sheep filled one valley. At the base of a much-larger valley on the opposite side, a large river – sharply blue against a straw-colored backdrop – meandered between mountains.

Inside the mosque, school was in session. About 50 children of all ages shared a single room, and it was clear that our visit was the most exciting thing to happen in awhile. They were very curious about these strange people, especially the woman with blonde hair, and crowded around us to get a closer look or, even better, touch us.

They proudly showed off their schoolwork, neatly scrawled on the small chalkboards they clutched. When it was time to go, the kids lined up to give us the sweetest goodbye hugs and kisses.

Next, we made our way to Uncle Jamal’s home at the end of the road. We were greeted by a dozen-or-so women and children, who herded us toward a very tall, very primitive- looking ladder propped against the house. Bewilderment gave way to terror as I began to understand they meant for us to climb up two stories to the roof. Ignoring the panic of my city-girl acrophobia and braced by many helping hands, I soon found myself rooftop, peacefully savoring a glass of warm mint tea in a cool breeze.

When we returned to Uncle Abdelkabir’s house, it was time for our bread and couscous-making lessons. For the bread, Aunt Zhoor expertly kneaded the dough on a clay platter, then shaped it into classic flatbread and placed in the wood-fired stone oven with a long, wooden peel. 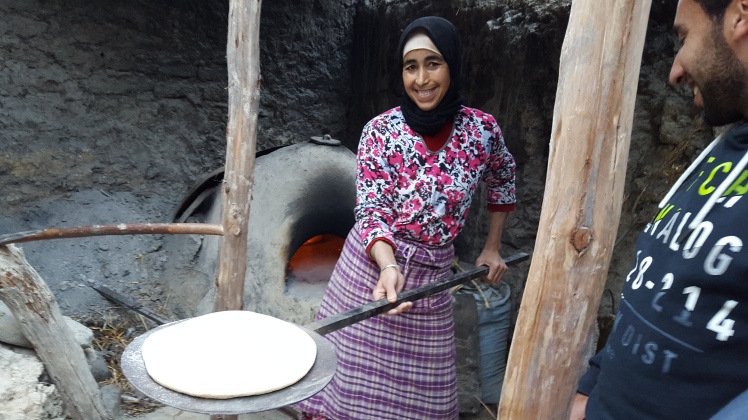 The couscous was made from a semolina and wheat flour dough, which was hand-processed into couscous beads using an age-old basket-rolling and sifting method (as demonstrated by Zhoor in this video). Grandma Fattema provided a bonus lesson – how to hand-craft the tiny pasta used in harissa, a traditional (and delicious) Moroccan soup.

As the sun set behind the river and the mountains beyond, the sky became a dazzling palette of oranges and pinks, and we gathered with the Elamrani clan for the evening meal. After salad and soup, we all ate directly from an enormous platter of stewed chicken and vegetables atop the couscous we helped to make. It was delicious. Life was good. 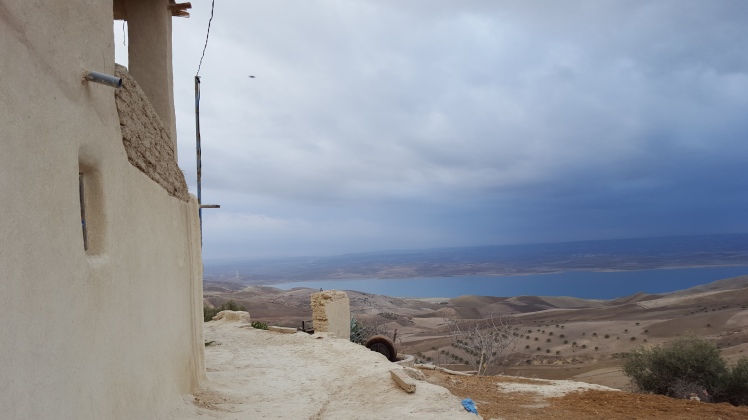 After many hugs and kisses, it was time to go. We realized how very fortunate we were to be so graciously welcomed into a family to live, just for a day, in a world completely unlike our own. We savored the breathtaking beauty, profound peacefulness and simplicity of life there. Although modern conveniences and the material stuff is nice, none of it is really required to live a happy life.

One thought on “Profound Peace and Simple Beauty: A Day in Rural Morocco’s Warm Embrace”